GO Sport Travel offers our clients a variety of ticketing options in safe and secure premium surroundings at Tottenham Hotspur Stadium. As one of a selected few Official Spurs agents, GO Sport Travel offer a selection of Tottenham hospitality packages, Spurs Hotel Package tickets and other additional ticket options. Our wide variety of matchday breaks at Spurs appeal to different customer needs based on budget and experience requirements making us the ideal partner for your Tottenham Hotspur Stadium outing. 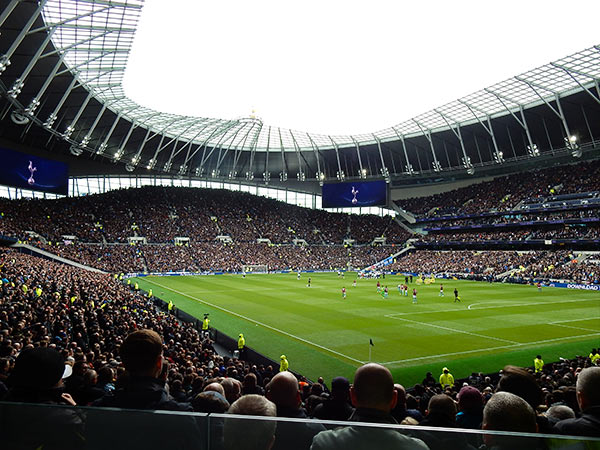 There has been little domestic success in recent years for Spurs but with the manager Jose Mourinho at the managerial helm and a youthful and talented squad including England’s Harry Kane, Denmark’s Christian Erikson and French shot stopper Hugo Lloris, the future looks bright for the North London club.

White Hart Lane was the home to Tottenham Hotspur FC until the spring of 2019. The epic stadium played host to several significant footballing events over the years and has showcased some of the worlds most talented and tainted footballers on its hallowed turf.

With the new Tottenham Hotspur Stadium ready for action it's prepared for new glory, with the stars of the future.

Under the recent time, Spurs have attracted a host of European players that have added flair and creativity to their playing style. The Spurs squad is littered with talented stars such as Harry Kane, Son Heung-Min and Delle Alli.

How do I buy Tottenham Hotspur tickets through GO Sport Travel?

To learn more about the different Spurs packages that GO Sport Travel offer, contact a member of our team via email info@gosporttravel.com or call +46 660-21 10 90. Our team will be sure to tailor the perfect package for your unforgettable experience.